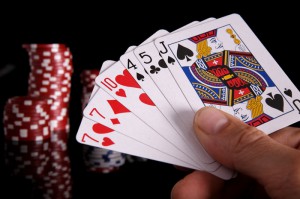 The action begins with the player sitting to the left of the big blind (seat No. 3, also known as the “first to speak” or “Under The Gun”). This player has the option to leave (throw his hole cards in the middle of the table, in English “fold”), see (put the same amount of the blind on the table, in English, “call”) or raise (putting two small bets in front of him, in English “raise”).

The action now moves up to Number 4 (the player sitting to the left of the post number 3), which has the option to fold, call, raise or raise again (but only if it is raised in front of him). The betting continues clockwise until each player who has left has contributed to the pot with the same amount of chips.