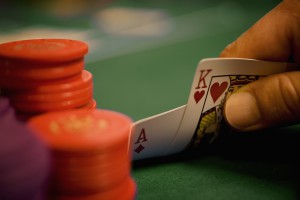 Tight / Loose refers to the number of the player’s hands. If a player will do very few hands, will be considered “tight” (closed, conservative). Almost all players with little experience are considered “loose” (open, loose) and have a tendency to play a great variety of hands hoping to get lucky. If you want to be a tight player, you’ll love playing this game since the beginning. Why one should never accept the role of inexperienced novice?

The style of play easier and more profitable for a beginner is one in which all players adopt a style that is loose / passive. These are games in which players tend to do a lot of weak hands. Adopting a style Passive / Aggressive is easy, in these occasions, earn money and win at poker.

The toughest games (most difficult to beat) are those in which players make a few hands and bet heavily when entering the flat, which rarely happens to a tight player. The style tight / aggressive, as regards resources, has less ups and downs, that the style loose / aggressive. Each style of play can be profitable for a player, the secret is to alternate your style and occasionally give you a strange bets or not bet at all, you need this because the other players find it difficult to classify your style of play and what makes you unpredictable and more dangerous game table.